Shannon Whitney Messenger decided it was time to give middle grade stories the attention they deserve, and "Marvelous Middle Grade Mondays" was born.

Spirits of the Sun 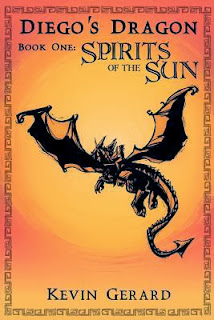 
An eleven-year-old Latino boy wins a district-wide writing contest for sixth graders. When an author visits his school to award his prize, Diego Ramirez has no idea how much his life is about to change.Nathan Sullivan hands Diego his statue, a handsome, glistening black dragon. He shakes his hand and leaves him to his friends. The students crowd around Diego, asking for permission to hold it.After hearing the name Magnifico spoken aloud by family and friends, Diego awards it to his new dragon. If he only knew how fitting the name was, he might have known what lay ahead.

Magnifico is the leader of the Sol Dragones, dragons that live within the magical fires of the sun. Nathan Sullivan is the earth's connection to the mysterious creatures. It is his task to find Magnifico's guide.As Magnifico comes to life he becomes quite mischievous, playing tricks on Diego to embarrass him. As he discovers his bloodline, however, Diego assumes greater control over his dragon and his destiny. In the climactic journey, he frees his people and suffers a terrible loss by guiding Magnifico to their goal.


Those of you who follow Project Mayhem may remember my post, "For the Love of Dragons", inspired by my daughter's obsession with dragon books. When presented with the opportunity to review Diego's Dragon, I jumped at it. Needless to say, my daughter was the first to read it. And now Kevin Gerard is her new favorite author! For a voracious reader like my daughter, that is the highest of compliments, especially considering her love for Erin Hunter's Warrior Cats series. Her enthusiastic commentary about book one, and her pleading for book 2, had me eager to read it for myself. All I can say is . . . my daughter was right.

For any fans of middle grade adventure or fantasy or dragons or boy books or epic awesomeness, this is the perfect story. It is unique in its storyline, vivid in its imagery, and gripping in its characterization. Magnifico the dragon is truly magnificent. My daughter is not alone in her enthusiasm for Diego or its author. Diego's Dragon will be a 5 book series--don't miss it!

I can tell you from personal experience that Kevin Gerard is a warm and very approachable author. He's a book blogger's dream. I have no doubt that he would be delighted to do interviews or guest posts for any of your blogs, possibly even a book giveaway. I emailed him about my daughter's love of his books and shared with her his responses to me. She positively ADORES him, and I know others will as well. In fact, we purchased copies of Diego's Dragon for her two best friends and her teacher for Christmas!

Kevin Gerard lives in San Diego, California, with his wife and four children. He teaches sociology and statistics for the California State University. After running three companies and working a variety of jobs, Mr. Gerard enrolled in school and earned a master's degree in sociology from Humboldt State University. He returned to San Diego after completing the program and worked with two professional research organizations over the next seven years. In 2004, Mr. Gerard resigned from the second position in order to pursue a writing career. While still teaching at the university, he spends the bulk of his time writing for publication. The Conor and the Crossworlds series provided the main impetus for his decision to permanently extricate himself from formal employment."

Where to find Diego's Dragon


Shannon Whitney Messenger decided it was time to give middle grade stories the attention they deserve, and "Marvelous Middle Grade Mondays" was born. 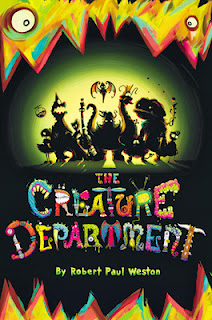 "The Creature Department is sure to appeal to those middle graders who like a lot of silliness, a bit of rickum rockery, and a giggle of grossness jumbled together in their stories. The scattered black and white drawings nicely complement the amusing text."
—New York Journal of Books

It’s a tentacled, inventive, gooey world in there…
Elliot Von Doppler and his friend Leslie think that nothing ever happens in Bickleburgh, except inside the gleaming headquarters of DENKi-3000 – the world’s eighth-largest electronics factory.
Beneath the glass towers and glittering skywalks, there’s a rambling old mansion from which all the company’s amazing inventions spring forth. And no one except Uncle Archie knows what’s behind the second-to-last door at the end of the hall.
Until Elliot and Leslie are invited to take a glimpse inside.
They find stooped, troll-like creatures with jutting jaws and broken teeth. Tiny winged things that sparkle as they fly. And huge, hulking, hairy non-humans (with horns). The Creature Department is unlike anything they’ve ever seen.
But when Chuck Brickweather threatens to shut down the DENKi-3000 factory if a new product isn’t presented soon, the creatures know they are in danger. And when Uncle Archie vanishes, it’s up to Elliot, Leslie, and every one of the unusual, er, “employees” to create an invention so astonishing it will save the Creature Department.

Yes, this book is every bit as fun as it looks, and so are the awesome websites and videos they have put together based on the character Gugor--SO awesome.  If you haven't already picked this one up, I suggest that you do. It's a middle grade masterpiece!
Fun Spots to Visit:

ABOUT THE AUTHOR: ROBERT PAUL WESTON 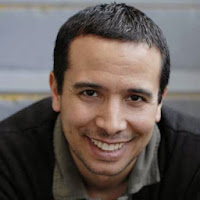 Robert Paul Weston is the author of Zorgamazoo, a novel entirely in rhyme, which was an E.B. White Read Aloud honoree and a “natural descendant of the works of Dr. Seuss and Roald Dahl.” It was also a Booklist starred top ten debut of 2008 as well as a recipient of the California Young Reader’s Medal, the Silver Birch Award, and the Children’s Choice Award.
Weston’s second novel was the hardboiled fairy-tale Dust City, which was nominated for the Edgar Allan Poe Award for Best Young Adult Mystery.  Prince Puggly of Spud and the Kingdom of Spiff published in February 2013.

All of Zack Lydon's time is devoted to drawing things. When he is not drawing a blank, he is probably drawing a bath. Part of Zack's daily routine involves drawing attention to things that look pretty, smell curious, or sound eerie. Zack seldom draws attention to himself, because he dislikes drawing crowds - too many details.
Zack is currently a designer at Framestore NY where he draws a good deal of inspiration from the talented folks around him, and subsequently, draws pictures. At Framestore, Zack has worked as the illustration and animation lead for the audible.com campaign, an info graphic for Motive, and the concept artist for the Wikileaks documentary “We Steal Secrets,” among other campaigns. Using drawings to tell an original story was an amazing experience for Zack, and he intends to do it for the rest of his life.