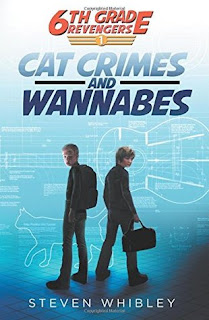 Jared and Marcus aren't like other 11-year-olds...they're also Revengers. They fix problems and they're awesome at it-at least, they will be if they ever get a chance to show off their skills. What they need is exposure. Luckily, they have the perfect target in mind: Jared's sister's boyfriend. He's a jerky, wannabe rock star, a relentless bully and he smells like old gym socks. Enough is enough. The tone deaf jerk's days are numbered. There's only one hitch: Marcus already offered their services elsewhere.

A stray cat with serious aggression issues apparently has a whole neighborhood boarding up their windows. What the boys think will be an easy-money job quickly turns into a dangerous game of wits. The cat's a monster. It takes all the ingenuity the boys can muster to deal with this beast. Two targets at once. It's time to prove themselves as the awesome after-school problem-solvers they know they are. That is, if their plan doesn't backfire. Because they'll either be feared fixers or a couple kids who can't even take out a kitten.

Jared and Marcus enjoy one adventure after another, "revenging" other people's issues in order to make the money they need to go to spy camp. From tackling the evil neighborhood cat to ridding themselves of an irritating sister's boyfriend, the duo are always full of fun. Middle grade readers--boys especially--will enjoy the fun pace and spot on humor of this one!

Shannon Whitney Messenger decided it was time to give middle grade stories the attention they deserve and "Marvelous Middle Grade Mondays" was born.