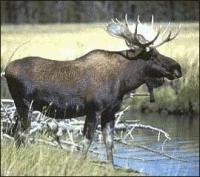 The awkward moose, a homely behemoth,
Can be seen vacillating between
The river and the woods,
Standing unsure amid a plethora of yellow daffodils,
Listening to the quiet beckoning of her thirst.

Awed by the natural reciprocity between
Animals and nature,
The photographer savors the moment in silence,
Waiting for the mama to cajole her young calf
From the trees.
Posted by Shannon O'Donnell at 12:57:00 PM 0 comments

Links to this post
Email ThisBlogThis!Share to TwitterShare to FacebookShare to Pinterest
Labels: My Writing, Personal, Poems

The Skin We're In

This is a much shortened version of a poem that just sort of popped into my head and out of my pencil one day.

In prayers is where God wants to hear
Of all the things we need down here
Don’t be afraid to turn His way
And pray to God with love today
For peace, for health, for family
For courage, friends, or to be free

Send loving thoughts and pleas for help
To those too far to reach yourself
The skin we’re in can’t stretch as far
As God’s embrace, His loving arms
He reaches out to those in need
When prayers request He intercede

God hears us when we pray in faith
For help to guide the human race
We need to pray more often, though
So Grace and Truth can help us grow
Bow your heads and fold your hands
And pray to God, who understands

The skin we’re in may limit us
And keep us bound to earth and dust
But prayer is more than bones and skin
And reaches past the space we’re in
In God we place our faith and trust
That He may bless each one of us
Posted by Shannon O'Donnell at 3:23:00 PM 0 comments

Links to this post
Email ThisBlogThis!Share to TwitterShare to FacebookShare to Pinterest
Labels: My Writing, Personal, Poems

Finally, no Naughty Boy Factory would be complete without the Hands and Feet Department. It was their last stop. Scott’s line of boys stood and stared, mouths open, at the building in front of them. It was the tallest building at the factory, and it was shaped like a giant leg! The bottom floor looked like a large foot with separate hallways branching out like toes, and there were skylights at the end of each hallway that actually looked like toenails.

An unusually tall man with fuzzy, bright-red hair greeted the boys at the entrance.

“He must be at least eight feet tall!”

“Yeah. And have you ever seen hair like that?”

“It’s no wonder he’s in charge of this department. Look at the size of his feet!”

The boys gawked in wonder as they waited for him to speak.

“Hello. I’m tickled to announce that this is where your most momentous changes will take place. Following a series of complicated, top-secret adjustments, that compulsive and annoying need to always be touching, pushing, hitting, kicking, bouncing, poking, and run-run-running will be gone. Yes, we’ll have you fixed right up.”

All the nerves in Scott’s little body were tingling. He didn’t feel quite right about this. How was he supposed to be a little boy if he couldn’t tussle with his friends at recess or tackle his big brother in the backyard or pinch his little sister just for the fun of it? That’s what little boys do. They kick the pew in front of them at church. They run recklessly down the hallways at school. They accidentally trip each other, shove each other, and whack each other, all day long and wherever they go.

Suddenly, Scott didn’t want to do this anymore. He glanced around, searching for a way out and noticed the other boys looked just as panic-stricken as he felt. As a last hope, he raised his hand and murmured, “Excuse me. Sir? Please. Excuse me.” The man and every boy in line gaped at Scott.

“I don’t get it. I know I’m not a very good listener, because everybody’s always telling me to open my listening ears. And I know I’m not a good cleaner, because I always need someone to help me clean my room - I’m really good at making messes, but I hate to clean them up all by myself. My manners are okay, but I do like to stick my tongue out at bratty girls, and my mom says I talk too loud. Fixing that stuff made a little bit of sense to me. I guess. But I don’t get how come we can’t wrestle or kick or chase each other really fast down the hall anymore. That’s just fun stuff. My grandma says that’s what little boys are born to do.”

The boys in Scott’s line enthusiastically agreed with him. Some of them were giving him the ‘thumbs up’ sign and others just smiled encouragingly.

“I’m not trying to be rude, sir. Honest. But I really don’t get it. Can’t we have any fun? Does being good all the time mean we can’t sword-fight with sticks or smash bugs or thump on each other…ever? I mean, that’s the best part of having hands and feet!”

For the first time that day, Scott had left a factory guide speechless. After a few uncomfortable seconds, the tall man answered guiltily, “Well, we can’t have boys running around all the time and beating on each other, can we? Grown-ups everywhere would complain.”

Inspired by Scott’s bravery, a shy boy near the front of the line timidly whispered, “But didn’t you ever play like that when you were little like us?”

The man blinked in surprise, but didn’t say anything.

Then another boy asked, “Don’t you remember how much fun it is to beat sticks on the ground until they break? Or to run in circles after the neighbor’s dog until you fall down dizzy? Or to tackle and wrestle your best buddy until one of you gets hurt?”

The boys stared at the fuzzy-haired man, almost as if they felt sorry for him.

Just then, one of the delivery wagons stopped nearby. The baffled man from the Hands and Feet Department looked from the boys, to the wagon, and back to the boys again, while restlessly rubbing his fuzzy, red hair. In a madcap moment of weakness, the man made a quick decision. He was sure he’d regret it later, but for the moment it didn’t matter.
Posted by Shannon O'Donnell at 9:17:00 AM 0 comments

For about a year my middle child, Scott, wouldn't sleep in his bed. He would sleep on the floor, he loved to sleep on the couch, but he would NOT sleep in his bed. I assumed it was a phase that would eventually pass - kind of like the six months he spent telling everyone he met that he was born part monkey. Alas, I was wrong.

When I finally realized he wasn't going back to his bed on his own, I announced (in my firmest mom-voice) that unless he could explain why he wouldn't sleep in it, I was going to give his bed to a little boy who would appreciate it. Unphased, Scott looked directly at me and calmly answered, "I can't sleep in my own bed because it has radiator springs in it." I had no idea what that meant and could only stare blankly at him. He repeated himself, but slowly so I could understand - yeah, right! Then he informed me, in the same quiet tone, that if I wanted him to sleep in his own bed I had to buy him a Tempur-Pedic! I couldn't help myself - I laughed aloud. Scott didn't think it was funny.

Why did he need a Tempur-Pedic (and how does he even know what one is)?
The answer: "Mom! Don't you know Tempur-Pedic changes the way the world sleeps?!"

I gave his bed away and we picked out a double-sized satellite chair cushion from Pier One Imports. He loves it!
Posted by Shannon O'Donnell at 11:34:00 AM 0 comments

My daughter, the youngest of my three children, began kindergarten last week. Like all parents, we kissed her goodbye, waved as we backed out of the room, and then envisioned the wonderful day she would have. Big brother Scott (now a mighty second grader) vowed to help her through breakfast and recess and her first, after-school bus ride. The stage was set for her perfect first day!

We met them at the bus that afternoon. Molly flew straight for her daddy's legs and firmly attached herself, then began to sob incoherently. Scott jumped from the bottom step of the bus and proudly announced that Molly got sent to the principal's office on her first day of school! It took a few hours and some help from Scott to finally figure out her day.

Molly is truly frightened of any kind of flying, buzzing thing with wings, especially those with stingers - even mosquitoes. She becomes hysterical and races blindly around, trying desperately to escape or hide. She is absolutely inconsolable during these moments. Unfortunately, her school playground was not a bee-free zone. Molly became so uncontrollably hysterical that she frightened even the recess monitors! Desperate to get her inside (away from the bees), yet knowing she needed adult supervision (remember, she's only five), they sent her to the principal's office. He gave her a smile, a mint, and a safe place to hide until recess ended.

When asked about the rest of her day, Molly told us the teacher just talked all day long. When we asked her what the teacher said, she replied, "I don't know. I wasn't listening. I hate kindergarten!" That night, after being tucked in snug-as-a-bug, Molly came and stood by our bed. She looked at us and then proclaimed loudly, "I had such a great day today!"
Posted by Shannon O'Donnell at 10:57:00 AM 0 comments