Fourteen-year-old Luce is one of those lost girls. After her father vanishes in a storm at sea, she is stuck in a grim, gray Alaskan fishing village with her alcoholic uncle. When her uncle crosses an unspeakable line, Luce reaches the depths of despair. Abandoned on the cliffs near her home, she expects to die when she tumbles to the icy, churning waves below. Instead, she undergoes an astonishing transformation and becomes a mermaid. A tribe of mermaids finds Luce and welcomes her in—all of them, like her, lost girls who surrendered their humanity in the darkest moments of their lives. The mermaids are beautiful, free, and ageless, and Luce is thrilled with her new life until she discovers the catch: they feel an uncontrollable desire to drown seafarers, using their enchanted voices to lure ships into the rocks.

Luce’s own talent at singing captures the attention of the tribe’s queen, the fierce and elegant Catarina, and Luce soon finds herself pressured to join in committing mass murder. Luce’s struggle to retain her inner humanity puts her at odds with her friends; even worse, Catarina seems to regard Luce as a potential rival. But the appearance of a devious new mermaid brings a real threat to Catarina’s leadership and endangers the very existence of the tribe. Can Luce find the courage to challenge the newcomer, even at the risk of becoming rejected and alone once again?

Lost Voices is a captivating and wildly original tale about finding a voice, the healing power of friendship, and the strength it takes to forgive.

I loved the original premise of this story and the world Sarah Porter created. The story flows like the water Luce swims in. There were a few spots I thought the descriptions were a bit confusing, but that did not take away from the overall powerful imagery. The "bad girl" is definitely not a likable character - a great villain. We see it coming and I kept hoping Luce would find a way to best her. I wish Luce's character had been a bit more social with the others, but I understood why she wasn't.

I enjoyed this story and suggest adding it to your Goodreads list. 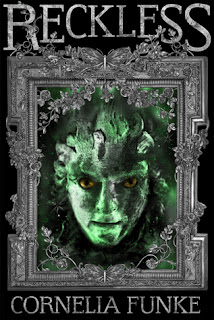 Beyond the mirror, the darkest fairy tales come alive. . . .

For years, Jacob Reckless has enjoyed the Mirrorworld’s secrets and treasures.
Not anymore.
His younger brother has followed him.
Now dark magic will turn the boy to beast, break the heart of the girl he loves, and destroy everything Jacob holds most dear. . . .
Unless he can find a way to stop it.

The Inkheart Trilogy is one of my all-time favorite series (in spite of the Inkheart movie atrocity), so I was giddy when I first learned of this new series. Cornelia Funke is one of the best world-builders ever. She makes me long to climb inside her stories so I can experience her worlds for myself, and the Mirrorworld is almost as incredible as the Inkworld--almost. This time her bad guys are rock creatures called Goyle and an evil fairy who helps them. Jacob Reckless is the perfect hero with the perfect side-kick--a shape-shifting fox girl.

I would place this story in the upper MG/lower YA category, probably leaning a bit more toward YA--I couldn't resist it, though. Hopefully you'll forgive me this one time. If you love worlds of fantasy, you'll love this book. My 13-year-old and I both give it two thumbs up!