I wrote this poem a long time ago for one of the sweetest, sunshiniest people in all of blogdom--our Lenny. I thought this was a perfect day to share it with all of you (and Lenny, too) again. 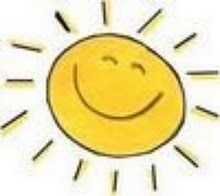 Today, many of us have joined together to spread sunshine throughout the blogosphere. But not just ANY sunshine. This sunshine is extra, super-dee-duper SPECIAL. This is Lenny Lee Sunshine, which is the very best kind!!


Outside's a gray and cloudy sky
the wind it howls, the rain does fly
but here online, we're safe and dry
because we have the "sunshine" guy

The sunshine guy? Who is he?
I gasp! I cough! It cannot be
that you don't know of LENNY LEE
the kid who's always sunshiney

Each place he goes, he shines so bright
that heavy hearts once more are light
and laughter echoes--echoes--our delight
each time we read the things he writes

When brush-offs leave you feeling blue
revision...plotting...queries, too
Here's good advice to pull you through:
Let Lenny's sunshine brighten you.

Email ThisBlogThis!Share to TwitterShare to FacebookShare to Pinterest
Labels: Celebrations

The Gathering Darkness
by Lisa Collicutt

Don't miss this new YA!!

Blurb:
They say “third time’s the charm,” and for sixteen-year-old Brooke Day, they had better be right. She’s been here before, twice in fact, and so has the darkness awaiting her return.

When Brooke is forced to leave Boston for the village of Deadwich, she thinks her life is over. New friends become estranged—downright evil. But worse, recurring nightmares become reality.

Enter Marcus Knight; he’s popular, hot, and the only person Brooke can trust.

Not to mention, they’ve shared the same nightmares.

With the discovery of an ancient Celtic amulet, Brooke and Marcus unravel the secrets ofher past, revealing the path to her future.

As the equinox approaches, darkness and light merge for the first time in a century. Soul-mates reunite. Magic awakens.

Lisa likes to write dark and twisted tales of magic and romance. She has a passion for Young Adult and New Adult Paranormal Romance. When she’s not conjuring tales about witches, demons, and other magical beings, she can be found leathered and bound to the back of her husband’s Harley, touring her homeland of Nova Scotia, Canada.

CATS AND CLAIRE’S FEELINGS IN FERAL by HOLLY SCHINDLER
FERAL jacket copy:
The Lovely Bones meets Black Swan in this haunting psychological thriller with twists and turns that will make you question everything you think you know.

It’s too late for you. You’re dead. Those words continue to haunt Claire Cain months after she barely survived a brutal beating in Chicago. So when her father is offered a job in another state, Claire is hopeful that getting out will offer her a way to start anew.

But when she arrives in Peculiar, Missouri, Claire feels an overwhelming sense of danger, and her fears are confirmed when she discovers the body of a popular high school student in the icy woods behind the school, surrounded by the town’s feral cats. While everyone is quick to say it was an accident, Claire knows there’s more to it, and vows to learn the truth about what happened.

But the closer she gets to uncovering the mystery, the closer she also gets to realizing a frightening reality about herself and the damage she truly sustained in that Chicago alley….

Holly Schindler’s gripping story is filled with heart-stopping twists and turns that will keep readers guessing until the very last page.
~
Feral cats do help add to the creepy atmosphere in FERAL…but they’re actually also included in the book for far more important reasons than that…
“Feral,” as a few reviewers recently stated, can mean “untamed,” as well as “wild” or “uncontrollable.”  So many elements in the book fit these definitions: the gang that corners and beats Claire in Chicago, the nightmares that persist as she attempts to heal from the attack.  Later, when Claire goes to Peculiar for her father’s sabbatical, the spirits that live in the town fog pursue her in a wild way as well—as does the ghost in the basement of the high school.  And, yes, the feral cats pursue Claire in increasingly vicious or disturbing ways.
Peculiar, as it turns out, is absolutely no escape for Claire.  Her surroundings are a mirror-image and constant reminder of the night of her beating.  And one of the feral cats—Sweet Pea, a gnarled-looking, ancient old calico—is beginning to chase Claire far more intensely than the other cats…
It becomes clear that Sweet Pea is chasing Claire because she is being inhabited by the spirit of Serena, the high school student whose body Claire discovered soon after arriving in Peculiar.  Only, Serena doesn’t want to be inside Sweet Pea.  She wants to be a seventeen-year-old girl, who does seventeen-year-old things.  She wants to write for the paper and live in her favorite house and go to dances…The only way to do those things, she decides, is to get inside Claire…
The end reveals that the old calico (Sweet Pea) is actually a mirror image of what Claire desires most for herself.  Sometimes, those thoughts we have ourselves—the things we think that we would never, never, NEVER want the rest of the world to know—those are the things that are maybe the wildest, most ferocious of all…

FERAL &THE
PSYCHOLOGICAL THRILLER:
FERAL falls squarely into the realm of the classic psychological thriller.  While the book features mystery, horror, and paranormal elements, the emphasis is on the “psychological” rather than thriller / action.  The novel features a Hitchcockian pace and focus on character development (here, we’re exploring the inner workings of the main character, Claire Cain).
Essentially, every aspect of FERAL is used to explore Claire’s inner workings—that even includes the wintry Ozarks setting.  The water metaphor is employed frequently in psychological thrillers to represent the subconscious, and here is incorporated in the form of a brutal ice storm (that represents Claire’s “frozen” inner state).  The attempt to untangle what is real from what is unreal (another frequently-used aspect of the psychological thriller) also begins to highlight the extent to which Claire was hurt in that Chicago alley.  Even the explanation of the odd occurrences in the town of Peculiar offers an exploration into and portrait of Claire’s psyche.
Ultimately, FERAL is a book about recovering from violence—that’s not just a lengthy or hard process; it’s a terrifying process, too.  The classic psychological thriller allowed me to explore that frightening process in detail.

Her debut MG, THE JUNCTION OF SUNSHINE AND LUCKY, also released in ’14, and became a favorite of teachers and librarians, who used the book as a read-aloud.  Kirkus Reviews called THE JUNCTION “...a heartwarming and uplifting story...[that] shines...with vibrant themes of community, self-empowerment and artistic vision delivered with a satisfying verve.”

FERAL is Schindler’s third YA and first psychological thriller.  Publishers Weekly gave FERAL a starred review, stating, “Opening with back-to-back scenes of exquisitely imagined yet very real horror, Schindler’s third YA novel hearkens to the uncompromising demands of her debut, A BLUE SO DARK…This time, the focus is on women’s voices and the consequences they suffer for speaking…This is a story about reclaiming and healing, a process that is scary, imperfect, and carries no guarantees.”

Schindler encourages readers to get in touch.  Booksellers, teen librarians, and teachers can also contact her directly regarding Skype visits.
She can be reached at:
hollyschindlerbooks (at) gmail (dot) com, and can also be found at hollyschindler.com, hollyschindler.blogspot.com,
@holly_schindler,
Facebook.com/HollySchindlerAuthor, and
hollyschindler.tumblr.com

Rafflecopter form for a giveaway of a signed copy of FERAL (running from Sept. 27- Oct. 13):
a Rafflecopter giveaway
Posted by Shannon O'Donnell at 8:04:00 AM 3 comments