My oldest child has always been a picky eater - always. When he was in pre-school, we had morning trauma if his Pop-Tart was somehow broken. He wouldn't eat the broken one, he didn't want a new one - he wanted the broken one, NOT broken. Like I could somehow magically repair it. He cried, devastated, in that way that makes all moms wish they could wave a magic wand and make everything better.

One of my favorite food moments with him, though, came at the end of a school day. I picked him up at daycare, asked him how his day went, and he burst into tears.

"They tried to make me eat cat food for lunch!"

Of course I tried to reassure him that they would never do such a thing, but he was insistent. "I said I didn't want any, but they made me take a 'thank you' bite!" More tears.

Confused, the following day I asked what they had served for lunch the day before.


I know many of you are parents. Have you ever used any of your children's funny, weird, or frightening moments in any of your books? 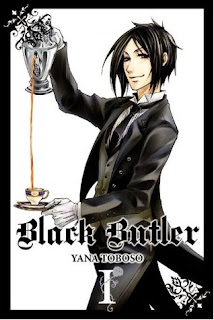 
Just a stone's throw from London lies the manor house of the illustrious Phantomhive earldom and its master, one Ciel Phantomhive. Earl Phantomhive is a giant in the world of commerce, Queen Victoria's faithful servant...and a slip of a twelve-year-old boy. Fortunately, his loyal butler, Sebastian, is ever at his side, ready to carry out the young master's wishes. And whether Sebastian is called to save a dinner party gone awry or probe the dark secrets of London's underbelly, there apparently is nothing Sebastian cannot do. In fact, one might even say Sebastian is too good to be true...or at least, too good to be human...


The last thing I wanted was for my daughter to get into Anime or Manga. I believed they were just too weird, too non-traditional for me . . . cuz they are.

However, I cannot begin to express the happiness they bring her. She begs to go to the library, where she will fill a bag with 10-15 books. Then, she races to her bedroom where she will sit for hours reading them. She adores the characters. She laughs and cries with them. She obsesses over them and dresses up like them with her friends--all the things we wish for our children when it comes to reading.

While they are not my cup of tea, Manga titles engross MG readers every bit as much as traditional titles. I have been converted and convinced. The key, though, is to make sure they are not reading adult titles, which can be highly inappropriate. Therefore, I'm starting a review series of appropriate MG Manga series, of which BLACK BUTLER reigns (at least according to my daughter *grins*).

Have you read any MG Manga? 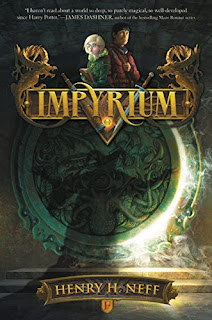 In the first book of Henry H. Neff’s new high-stakes middle grade fantasy series, two unlikely allies confront a conspiracy that will shake the world of Impyrium to its core.
For over three thousand years, the Faeregine dynasty has ruled Impyrium. But the family’s magic has been fading, and with it their power over the empire. Whether it’s treachery from a rival house, the demon Lirlanders, or rebel forces, many believe the Faeregines are ripe to fall.

Hazel, the youngest member of the royal family, is happy to leave ruling to her sisters so that she can study her magic. But the empress has other plans for her granddaughter, dark and dangerous plans to exploit Hazel’s talents and rekindle the Faeregine mystique. Hob, a commoner from the remote provinces, has been sent to the city to serve the Faeregines—and to spy on them.

One wants to protect the dynasty. The other wants to destroy it. But when Hazel and Hob form an improbable friendship, their bond may save the realm as they know it…or end it for good.

Henry Neff is one of my favorite MG authors. I have read and re-read his TAPESTRY SERIES, and it never gets old. IMPYRIUM is set in the same world, but many, many years later. At first, it was a little unsettling to revisit the world of Max and David and Mina without them there, but I quickly became engrossed with the newness of it all and with the utterly likeable new cast of characters. I LOVED IT! Now begins the long wait for the next book. While this works perfectly as a stand-alone novel, I would highly recommend beginning with THE HOUND OF ROWAN and completing the Tapestry Series first. It will add a whole new level of enjoyment and appreciation for Impyrium.

Shannon Whitney Messenger decided it was time to give middle grade stories the attention they deserve, and "Marvelous Middle Grade Mondays" was born. For a full selection of MMGM posts, visit her website HERE.

The river is famous to the fish.

The loud voice is famous to silence,
which knew it would inherit the earth
before anybody said so.

The cat sleeping on the fence is famous to the birds
watching him from the birdhouse.

The tear is famous, briefly, to the cheek.

The boot is famous to the earth,
more famous than the dress shoe, which is famous only to floors.

I want to be famous to shuffling men
who smile while crossing streets,
sticky children in grocery lines,
famous as the one who smiled back.

I want to be famous in the way a pulley is famous,
or a buttonhole, not because it did anything spectacular,
but because it never forgot what it could do.


This is the kind of fame we can ALL have. It is within our reach every single day. As we strive to finish our WIP's, find our agents, sell our books, and stroke the bindings that proudly display our names at Barnes & Noble, let us NEVER forget to be the one who smiled back.


Go. Be famous. And never forget what you can do.

"There’s no music in rest, but there’s the making of music in it. And people are always missing that part of the life melody, always talking of perseverance and courage and fortitude; but patience is the finest and worthiest part of fortitude, and the rarest, too."

Perseverance . . . Courage . . . Fortitude . . . all good qualities, all necessary to face a career in writing, all challenging.
And then there's PATIENCE. Ah, for me that's the most difficult one of all.  I am now entering the "shopping the manuscript" stage of this journey. It's out of my hands and into the hands of my agent. Time for patience . . .

I can persevere, because I'm stubborn and have all of you for support and encouragement. I can be brave, because it's who I am and I am not afraid of my dreams. I can have fortitude, because I have a loving family and our bloggy community. I have never, ever, had patience--and no one can give it to me.

The worst part of it, though, is that a lack of patience can cause a lack of faith, of hope. That's when I fall into the blues. It's particularly disheartening in the query stage. One day at a time . . . that's what I want my "life melody" to be.


How do you deal with the patience part of this writing journey?

Let Your Whole Self In


Write from your whole self. If you have a sense of humor, make sure that flavor’s in your writing. If you like talking ideas, make sure there are ideas in your writing. Anything less will be unsustainable. You will get bored inside the narrative realm you’ve created, in the same way it’s boring to sit at a desk all day filing papers. The only way to last for the long haul is to avoid boredom, and to avoid boredom you need to let your whole self in. (Not to mention you’ll bore your readers).

The idea that we need to write for ourselves, to write what we love, is not a new one. We can open any book on writing, turn to any friend, tour writing blogs... any number of things. That's because it's great advice - the real thing.

I am drawn to this quote by Po Bronson. There is something about it that connects with me, speaks to me in a powerful way. This quote makes me want to sit down and write. It makes me want to write better and to write in a way that is real.


What is something that draws you to your computer and makes you long to write?


"If you have other things in your life -- family, friends, good productive day work -- these can interact with your writing and the sum will be all the richer."

We all struggle to find ways to balance LIFE with our writing. We have jobs, kids with a million activities to be shuttled to and from, spouses, friends, churches, obligations . . . and we want to write.  Even those who have the luxury of staying home to write find balance difficult at times.
Guess what? That's okay. It's okay to let LIFE take over some times. It's okay to take a break from blogging or writing or editing or querying. IT'S OKAY.
Today, treat yourself to a day that's guilt-free. Embrace whatever you're doing, and let go of what you're not. It will all be there when you get to it. It's okay . . .
What will you choose NOT to feel guilty about today? 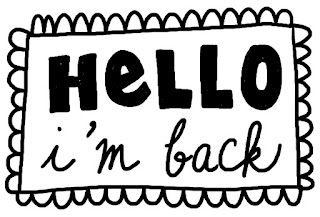 After a too-long absence from blogging, I am finally able to return to the group. I had to take some time away in order to juggle finishing the end of my MG novel and, well . . . life. Blogging was one thing too much.

I am thrilled to say that my story is FINALLY finished and safely in the hands of my agent. Woot! Now, we wait.

In the meantime, it's wonderful to be back to our blogging community, and I look forward to catching up with all of you!