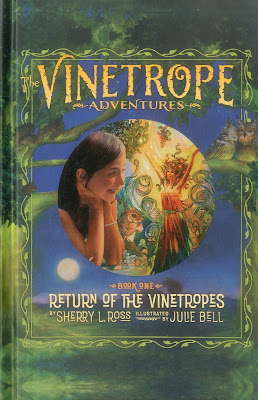 The wee-folk have returned. But we are surprised to learn they are called vinetropes, not fairies. Uncover the mystery of who vinetropes are and why they have returned in this first book in The Vinetrope Adventures series. Following a young girl, Sara, who has recently lost her mom to cancer, Return of the Vinetropes tells the story of the birth of remarkable fairy-like creature who Sara discovers in her backyard. She is Lucinda Vinetrope, born wise, full grown and all alone, but possessing some astounding powers. In fact, the very blood circulating in her body is a form of clean energy! Lucinda knows the world is different, not at all like she remembers it from her dreams in her growing chamber, but she is born and she must survive. The two protagonists, both lonely and bewildered by loss, instantly bond and begin a quest to see if other vinetropes do exist. Could Lucinda's birth herald the making of a Vinetrope Nation? But if so, it might also mean the return of their ancient, evil counterparts and put humans, vinetropes and all creatures of our earth in danger. With unique and life altering powers, vinetropes have the ability to shape the course of history for the better, but if the bad folk return as well, the future of mankind could be grim.

Chocked full of fantastic characters, such as the comical squirrel brothers Ekle and Apkin, the elegant and courageous owl named Owletta, and Jamuna, Sara's human friend who has the gift of prophesy, book one takes the reader on a mystifying journey into an unpredictable future.

My 13-year-old daughter and I took turns with this wonderful, new story. As soon as she saw the cover, she announced that she was going to read it first.  It didn't disappoint.

The world building and character development are both original and fascinating. The idea of plant people, vinetropes, who can heal the world, allow animals and other species (including humans) to communicate, as well as a myriad of other wonders is awesome. And personally, I fell in love  the squirrel brothers!

My daughter's favorite thing about the book was the gorgeous illustrations. They add another layer to the experience.

Despite its length, I recommend this book for all middle school and high school students. It is a wonderful beginning to an exciting new series! I look forward to book 2.

Next Monday, tune in for a guest post from author, Sherry Ross!!

Research the companies before hiring them. Check with different references to determine the BBB and look for your situation. These simple steps will help make a wise one.satta king

Great web site. A lot of useful information here. I’m sending it to several friends ans also sharing in delicious. And obviously, thanks in your effort! 야설


Very good information. Lucky me I recently found your website by accident I have book marked it for later!
일본야동
Also visit my web site 일본야동


I would like to thank you for the efforts you have made in writing this article. I am hoping the same best work from you in the future as well. 일본야동
Also visit my web site 일본야동

I have read your blog it is very helpful for me. I want to say thanks to you. I have bookmark your site for future updates.
야설
Also visit my web site 야설