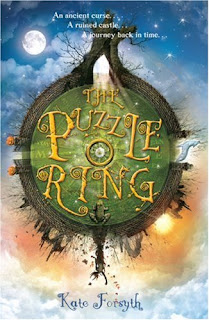 'The Puzzle Ring' is an historical fantasy for children aged 10+. It tells the story of a girl who discovers that her family was cursed long ago, and the only way to break the curse is to find and fix a broken puzzle ring. To do this, she must travel back in time to the last tumultuous days of Mary, Queen of Scots ... a time when witches were burnt and queens were betrayed and the dark forces of wild magic still stalked the land ...

Hannah Rose Brown was not quite thirteen years old when she discovered her family was cursed...

It seemed a day like any other day. Yet for twelve year old Hannah Rose Brown, it is the day when her ordinary life is changed forever, a day when she discovers a past full of secrets and a future full of magic.

Hannah lives with her mother, Roz. Her father Robert disappeared soon after she was born, and she and her mother are all alone in the world. Or so Hannah has always believed. Yet one day a letter arrives, addressed to the Viscountess of Fairknowe. Hannah thinks it's a hilarious mistake but the letter upsets her mother who confesses that Hannah’s father was the Viscount of Fairknowe, and the heir to Wintersloe Castle in Scotland.

The letter is from Hannah’s great-grandmother – someone she never knew existed – begging Hannah and her mother to come to Scotland. At first Roz refuses – she had sworn never to return to Wintersloe Castle. But Hannah is determined to go, her curiosity aroused by the letter’s reference to a curse.

Wintersloe Castle is an old house, built near the ruins of a castle and overlooking the waters of Loch Lomond. On the northern wall is a strange gate, built through the hollow trunk of an ancient yew tree. Through the gate, Hannah can see the round hill that rises behind the house, crowned with a blackthorn tree. This is called Fairknowe on the maps, but the locals call it the fairy hill.

Strange things begin to happen. A toad coughs up a round stone with a hole worn through the middle. When Hannah looks through it, the world seems different. She hears a dog howling at night – yet there is no dog at Wintersloe Castle. Shadows seem to stalk her. One stormy day, the toad shows her the way to her father’s old tower room – and Hannah discovers the history of the curse of Wintersloe Castle, which has blighted the family and the house for centuries.

Hannah is determined to break the curse, but to do so she must go back in time to the last tumultuous days of the reign of Mary, Queen of Scots. She must face all sorts of dangers, including being hunted by the evil queen of the Otherworld and being accused of being a witch... (taken from the Kate Forsyth website)

I loved this book! My son loved this book. YOU will love this book. In my opinion, The Puzzle Ring has not received the attention it deserves, yet I am confident its day will come. It is charming and suspenseful and full of fantasy.

Which of your current favorite reads has yet to receive the acclaim you feel it should?

I just got done reading a book called Freeze Frame! I'd never heard of it before but saw it on the shelf at the library. LOVED it!

Great review of the book. I'm interested in reading it. Great cover!

Thanks for the review...adding this to my "to read" lists on Goodreads as we speak...sounds fun!!!

Hmmm. There's so many books I read that ARE acclaimed. Sigh. So many books, so little time finds me turning to big-name books.

I have found a great little gem on China, Red China Blues, more of a research book, but not as acclaimed as you'd think...and it should be!

Blessings to you!
Patti

Awesome review!
I loved this one too :)
I'm SO glad you liked it :)
Thanks for the awesome post :)

Thanks for sharing. It sounds like a fabulous read. I'll have to buy it.

Looks like a book right up my alley. Thanks for pointing it out, Shannon.

Wow- great review! This sounds right up my alley! Thanks!

Thanks for the review, I want to read it!

Awesome! I'll add it to my TBR list for sure. Maybe to my son's TBR list too...

Oh, thank you so much! It's so nice to discover new books for my kidlet!

Ummm... Mary Queen of Scots? You know that's right up my alley!

Thanks for the recommendation!

I've had this on my Goodreads wishlist for a while - looks so interesting!

This book sounds great! I love historical fantasy!
I couldn't even begin to pick a book that doesn't get enough recognition...if I had my way kids and teens would be required to read more in school (which would result in more YA and children's books getting recognition that they deserve...) if only the world were run by writers, right? ; )

What a gorgeous cover! Thanks for the review, I'll add it to my list for SURE! ♥

I will be picking it up to read with my oldest son! Thanks! :)

I haven't read much historical fantasy, but this sounds great!!!

This sounds right up my alley! Adding it to my Goodreads list right now. Okay, I'm back. How could I resist a toad coughing up a magic stone? And Mary Queen of Scots - great scary time of history.

yay!! this sounds great! thanks for the heads up, shannon :D :D

This looks like a book right up my alley. Thanks, Shannon! I'm adding it to my TBR. :o)

Thanks for the review. You love it, I can tell. I'll see if I can track it down.

Awesome review! I'm looking for good books to read. This is on the top of my list. =) Whoop! Thanks Shannon! =)

wow, love this review! And so great of you to draw attention to deserving books! Way to go!

Sounds like a terrific book for my classroom! Thanks :)

I read The Curious Incident of the Dog in the Night-time. It was fantastic! It's told from the pov of an autistic teen and I think every teacher and any one else who works with kids of all kinds should read it. Incredible.

Sounds interesting, thanks for the info!

I always thought The Blue Castle by L.M. Montgomery was one of her better books, and that it would make a great family friendly movie.

Great book review! I'm a bit behind the times...I just bought the Book Thief. I read Out of the Dust, Peanut Butter for Cupcakes and Heist Society this week. They were all wonderful.

Sounds like an awesome book. Hopefully its day in the sun will come. :)

Well it's obvious this one would be a hit, the main character's name is Hannah. You couldn't ask for anything better. ;P

Oh, I was just thinking of one the other day *thinks too hard*

I think it was The Order of Odd Fish, by James Kennedy, but there was another one too...

I'll have to look up the Puzzle Ring now.